Is the Return to Work needed to foster innovation? 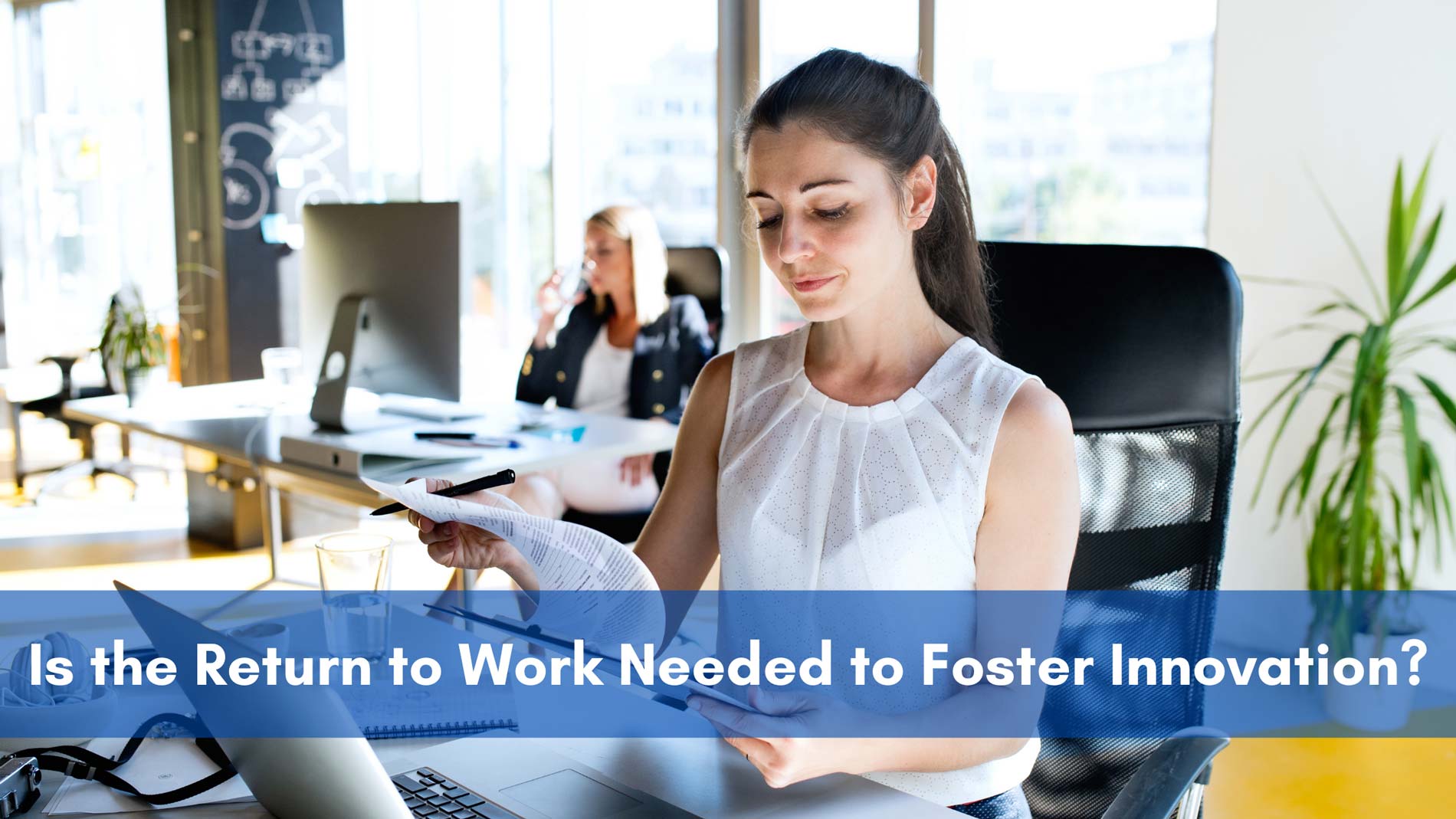 A recent article in the New York Times addressed this question and the answer just might be, “No”, the Return to Work in the office, the physical interaction, may not be a prerequisite to nurturing innovation in all but very specific industries.

Do you have an Innovation System?

Does the Open Office create opportunities for innovation?

It has been a long-held belief that bumping into colleagues in the hall, on the way to the cafeteria, creates opportunities for brainstorming, floating ideas or just enabling “hey how are you?” types of interactions that lead to out-of-the-box thinking.  The interesting point is that it seems that nobody has researched this ‘truism’.  Not until we were forced into working from our attics and basements by the pandemic did this concept get field-tested.  Now with the impending return to work, people are second-guessing this idea.

Six years ago McKinsey presented a thorough examination of what drives innovation in an organization.  The “Eight Essentials of Innovation” was the result of this research.  They tested companies by asking the question “Do you really innovate?”, based upon the following aspects:

These are very high-level organizational attributes and are also a reflection of a company’s culture.  There is no question that motivated employees are more likely to put more energy into, well, what motivates them.  At IBM, for example, employees are encouraged to file patents for their discoveries while IBM guides the legal process, freeing up scientists to innovate.

“In 2020, patents were awarded to more than 9,000 inventors located in 46 U.S. states and 54 countries. Since 1920, IBM has received more than 150,000 U.S. patents and played a crucial role in innovations ranging from magnetic storage to laser eye surgery.  IBM led the industry in the number of artificial intelligence (AI), cloud, quantum computing and security-related patents granted.”

But do any of these eight essentials have a dependency on employee physical co-location?  It appears not to be the case, as it all comes down to facilitating open communication.

From the McKinsey report:

“The rest of us can look for insights by methodically and systematically scrutinizing three areas: a valuable problem to solve, a technology that enables a solution, and a business model that generates money from it. You could argue that nearly every successful innovation occurs at the intersection of these three elements. Companies that effectively collect, synthesize, and “collide” them stand the highest probability of success. “If you get the sweet spot of what the customer is struggling with, and at the same time get a deeper knowledge of the new technologies coming along and find a mechanism for how these two things can come together, then you are going to get good returns,” says Alcoa chairman and chief executive Klaus Kleinfeld.”

Do you have an Innovation System?

The insight-discovery process, which extends beyond a company’s boundaries to include insight-generating partnerships, is the lifeblood of innovation… discovery is iterative, and the active use of prototypes can help companies continue to learn as they develop, test, validate, and refine their innovations. Moreover, we firmly believe that without a fully developed innovation system, large organizations probably will not innovate successfully, no matter how effective their insight-generation process is.

So having an Innovation System is key.  Relying on random, serendipitous collisions of ideas amongst wandering employees is not a system.  In fact, the recent trend to open office plans has given us some insights, a preview to the post-pandemic workplace environment.  Designed to foster personal interactions, the open office design has had the opposite effect, as research by Harvard Business School has discovered:

“There’s credibility behind the argument that if you put people in spaces where they are likely to collide with one another, they are likely to have a conversation,” said Ethan S. Bernstein, who teaches at Harvard Business School and studies the topic.  In December 2019… “We found that face-to-face interactions dropped by roughly 70% after the firms transitioned to open offices, while electronic interactions increased to compensate.”

Does the Open Office create opportunities for innovation?

By conducting similar experiments, a major software company discovered that 90% of face-to-face interactions took place at people’s desks. Just 3% occurred in common areas (the rest took place in meeting rooms). The company had been planning to move to free-address seating to increase interactions among teams, but it realized that would be highly disruptive to collaboration and abandoned the plan.

“Although the open-office design is intended to encourage us to interact face-to-face, it gives us permission not to.”

Many common assumptions about office architecture and collaboration are outdated or wrong. Although the open-office design is intended to encourage us to interact face-to-face, it gives us permission not to. The “accidental collisions” facilitated by open offices and free spaces can be counterproductive. In many instances, “copresence” via an open office or a digital channel does not result in productive collaboration.

While working as an application developer for a major company I had my own high-walled cubicle, about 8 feet square, which provided me with privacy and a relatively quiet space to concentrate.  Several months later they decided to go with an open office plan, with free-address seating.  The initiative was to increase the capacity of the office and possibly, to encourage communications.  Almost all employees were opposed to it.  During the transition period, people were placed in a temporary open-seat plan that was configured using the existing systems furniture.  Everyone was seated about four feet apart, fighting for power and network outlets.  Aside from the lack of privacy, discomforts like personal body odor were distracting, causing people to move about more than they normally would, looking for more suitable space to work.  Had the opportunity to work from home been presented at the time, I would have opted in, as would many others I assume.  As it was, I managed to find an open cubicle in another building from which to operate comfortably.  I left to work for another company before the open concept was fully implemented.

The takeaway from these experiences is that, forcing people into situations that deprive them of privacy and expose them to distractions hurts productivity and lowers morale.  The COVID-19 pandemic, with its emphasis on physical distancing, has thrown open-office concepts and theories up in the air.  The pandemic accelerated what was likely to be the future of the open office concept – an unpopular trend without many benefits.

So, does innovation thrive or suffer without physical interaction at the office?  Of course, that depends on the nature of the return to work.  Some industries, or perhaps certain management styles, have a hard time envisioning a remote workforce as being productive.  For example, a law firm partner recently wrote:

“Advocates of the move hoped that working from home would not slow productivity significantly and could obviate the need for office space in the future. But in a remote-work setting, we never matched the team creativity and production we had taken for granted at our office. On Zoom, some people were distracted and anxious to leave meetings, but in person, they were engaged and animated — there was just no comparison.

While lawyers at other Houston law firms claimed to be happy with remote work, I believe it prevented us from performing at our sharpest. There is a cost to working at home that goes beyond depression, disconnectedness and failing to bathe regularly: It can drain morale and diminish collegiality.”

The writer goes on to advocate the spin-offs:

“Our choice to reopen the office was not just about our bottom line. Nor was it just about the collaborative nature of a physical office space or about keeping our administrative staff employed. We wanted people driving to work and supporting our many energy-sector clients and stopping for coffee and lunch to keep the city’s local economy going. We felt some moral obligation to help our city thrive again.”

Eighteen months in, the emergence of the Delta Variant has upended the Return to Work initiatives of many firms.  The availability of effective vaccines has introduced another factor, where the unvaccinated are being viewed as a threat to the return of ‘normal’ operations, creating a two-tiered workplace – different rules for the two cohorts.  Extending the work from home option to employees, vaccinated or not, may be the only viable course of action in the near term.  Let the employees decide where they wish to work from going forward, so long as there is a system is in place to enable communication and foster innovation, from anywhere.

“At Zillow, nearly all employees will be remote or come in only once in a while. Several times a year, teams will go to small offices set up for gathering.  said Dan Spaulding, chief people officer at Zillow, the real estate marketplace. “All of this suggests to me that the idea of random serendipity being productive is more fairy tale than reality,”