Are businesses looking to the Cloud in the post-pandemic times? 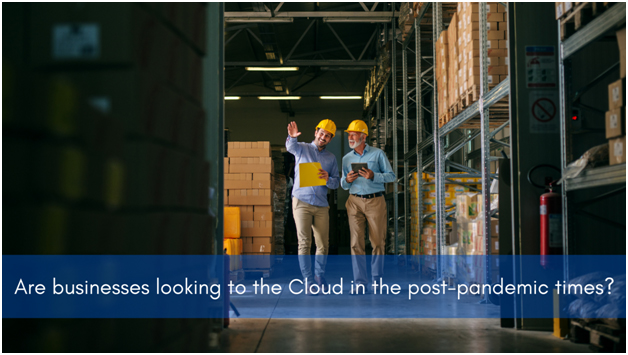 If you aren’t aware of what “a Cloud” is in networking and database terms, at a high-level it is simply having what is called “Software as a Service”, or SaaS, to support your Information Technology (IT) needs. Prior to SaaS, most businesses would have their own internal IT department, who were tasked with serving multiple other departments, each with an array of technologies. As complexity built over time, IT departments needed to retain highly- technical staff who were trained and familiar with the software applications, data management, backup procedures and so forth. Also, hardware and network expertise were needed ‘in-house’.

Risks in managing your own IT applications

For most firms, their core business is not IT support, it may be in manufacturing or retail, in healthcare or government services. Yet, their core business relies heavily on ensuring all IT systems are up 99.9 percent of the time. A disruption to internal IT services could grind the entire business to a halt, costing significant time and money. And not just needing time to fix the problem but the downtime affect on operations can be incalculable. It is possible that internal IT staff may be at a disadvantage when diagnosing a complex outage or problem if they aren’t steeped in the knowledge of dealing with such disruptions. Calling in outside expertise at the last minute could be a very costly unplanned event.

Going back a bit further, corporate computer systems began as huge, centralized mainframes with ‘dumb terminals’ linked to it by a variety of local area network technologies. With the advent of the Personal Computer (PC), software applications performed better when installed on a local desktop PC, giving the end user a more dynamic experience. Data became decentralized in many cases. Often technicians would need to personally visit an employee’s desk to update their applications. Then came the internet and the world wide web and of course, the Web Browser. With the web browser being a very ‘lightweight’ desktop application that pulled data from de-centralized web servers, it began to feel a lot like PCs were becoming dumb terminals again, at least to
the degree of the end user not needing to “load software”, rather they just “visit software”. And this is the basic idea behind SaaS. End users visit their applications instead of installing them, and the convenience is huge.

No fuss, no muss

Subscribing to a software application is a familiar experience for many people who use the Internet today. Think of a service like TurboTax. There was a day when you would need to order the software on a CD that would arrive in the mail, then install it on your computer. Each year you would need to install updates to the software to keep current with the various changes in the tax code. If your computer hard drive failed, you would need to start all over again with a new PC. As you could see, if your computer failed while using TurboTax Online, none of your data would be lost or ‘in limbo’. You would simply log into the site from any PC or mobile device and continue unabated. We at eCIFM have helped clients who found themselves in similar situations. Some years ago, one of our major public school district customers experienced a serious systems outage with their IT infrastructure which caused their TRIRIGA IWMS to go offline. The application was unavailable for several days while the internal IT folks worked to resolve the issue. Following this event, eCIFM moved their on-site TRIRIGA installation to the Cloud, hosted on eCIFM’s datacenter. Not only has the system been 100% available since, their IT department also no longer has the task of upgrades, backups, patches or tuning, as all of this is handled by the SaaS infrastructure team at eCIFM.

The future of work

The COVID-19 pandemic forced many people to work from home and is still having a ripple effect on businesses throughout the world. Having critical business systems available online, 24/7, allowed employees to be productive wherever and whenever, all they need is an Internet connection. Furthermore, internal IT departments may have scrambled in the beginning to get their people connected and authorized to access the network remotely. 18 months later, a paradigm shift has occurred, where it’s almost normal to have employees determine for themselves whether they wish to work from home or at the office, or a combination of both – commonly referred to as the Hybrid Workplace. IWMS systems have been enhanced to respond to this hybrid model. Applications like TRIRIGA and iOFFICE have introduced “employee experience” interfaces where a person can reserve a workstation, office, meeting room or specialized equipment prior to their arrival.

Sophisticated algorithms can ensure people are not seated too close to one another. It will automatically dispatch a work order to the custodial staff to clean the workstation before and after the reservation. Software as a Service makes all this possible, with very little overhead burden on internal IT resources. To underscore this point further, nearly all Requests for Proposals (RFPs) issued by firms looking for an IWMS insist on a SaaS deployment as the first option, and often the only option. Very often those RFPs also require that the IWMS has a mobile app, for tablets and smartphones, thus giving employees the flexibility to operate as they wish. The future of work is in the Cloud.